In 1811 King George the Third was on the throne of England, the country was at war with France and Russia and Jane Austen published her first novel, ‘Sense and Sensibility’. In Canterbury the Methodist Chapel in St Peter’s Street was built to replace the earlier chapel in King’s Street which had become too small for the growing congregation.

Much has changed since that time and the chapel itself has undergone a number of alterations over the years, but the beautiful façade still makes an impressive landmark in the heart of the City.

As such it bears testimony to the faithful witness of the people called Methodists in the centre of Canterbury over the last two centuries, a people who share the same experience of the ‘Warmed Heart’ as that of their founder John Wesley. It is this same heart-warming experience that comes from following the way of Jesus that continues to lie at the heart of the Methodist Church today.

So during the bicentenary year, as much as we looked back and celebrated the past we also looked to celebrate the future. For although much has changed in 200 years one thing at least remains the same and that is our desire for all to come and know Jesus Christ as their personal Saviour. It was this that was the inspiration for the building of our Chapel 200 years ago and is the same vision that we, as Methodists in the present day, continue to share. 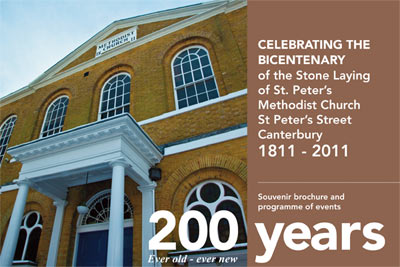 Login
Map
Directions
From Westgate Towers and walk up the High Street until you see the Oxfam Bookshop on the right, the Church is next door.